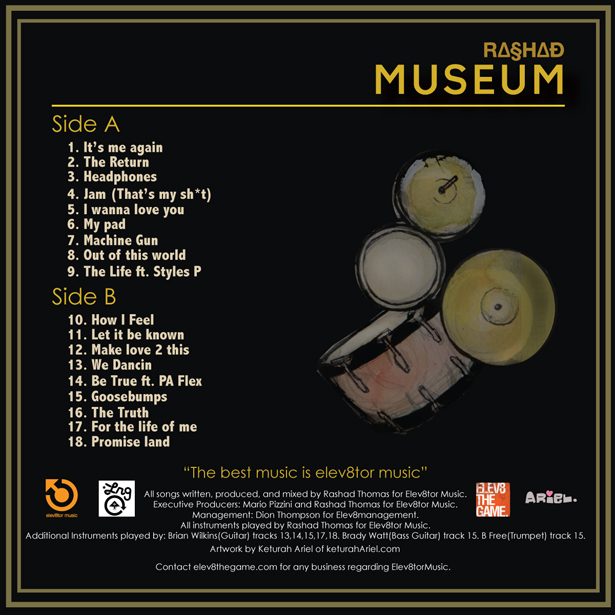 If you have been paying to attention to any of Stalley's music you might be familiar with the name Rashad. From the same hometown of Columbus, Ohio, Rashad brands his sound as Elevator music which you might think is the same music we hear on elevators but not quite. Rashad is reffering to elevating music to the next level and you can hear with his production and the concept of the record from the artwork to the soundclips. This is really a different style of R&B and Rap. Few features on Museum from Styles P and PA Flex, all production is by Rashad. Favourite tracks I have on repeat right now are Machine Gun, It's Me Again, My Pad, how about the whole record? Really just press play and take in the experience of Elevator Music.

Singer, songwriter and producer R∆§H∆Ð has come together with LRG Clothing and The DJBooth for the release of his debut album, Museum. The LP, which is a musical journey displaying the Ohio native and Elev8tor Music artist’ own brand of R&B, features previously-released songs “Be True” and “The Return.” Museum features guest appearances from Styles P. and PA Flex. All production and sound mixing comes courtesy of R∆§H∆Ð.