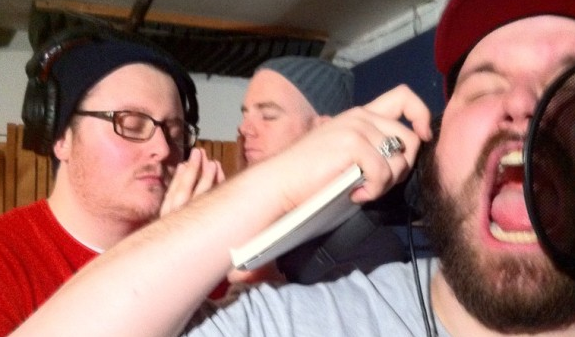 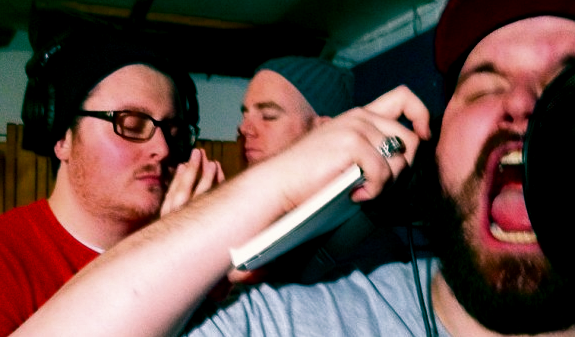 We usually talk about Much Music Thursdays here on TCUS because that's when T-Rexxx holds down Canadian hip-hop on the one and only Rap City. Recent Juno nominee and limelight hip-hop strangeheart D-Sisive held down a solid freestyle and spot on the couch there a couple weeks back, and just yesterday he was once again back in the Much studio along with frequent collaborator and TCUS favorite producer/emcee Muneshine.  But this time it's not for a Rap City feature. This time, he was in for a unique and special performance on the experimental independent program The Wedge.

If there's anyone who can pull off an indie/rap crossover it's D-Sisive, because he's always operated musically with one foot in both. And he's in top form alongside The Wedge host and Fucked Up frontman Damian Abraham, whom is making his rap debut here as Pink Eye and does a pretty damn sweet job. It sounds the way it looks in that photo above. If you don't know of Damian you should smarten up and get it straight because this is one guy you should definitely know exists. I've been a follower of Damian's for quite a while for many reasons beyond Fucked Up's music alone. Just thought I'd get that, uh, out in the open.

The track that came of their performance, "Wannabe," was cut at Central Audio in Toronto live on The Wedge then made its way to Muneshine's studio (The Bakker) for mixing before its bits and bites made their way on to us and then on to you. All in less than twenty-four hours. This is the digital age my children.