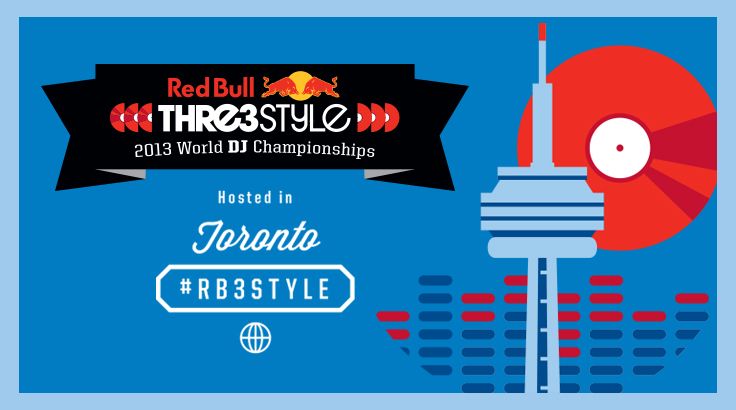 Red Bull Thre3style World Finals 2013 is taking place in Toronto this year, during November 4-9. Yesterday, The Drake Hotel hosted the official Red Bull Thre3Style 2013 World DJ Championships Welcome Night, presented by Sennheiser. For a complete list of the World Finalists' names, and when they will be competing, click here. DJs will also be joined by headliners including Kid Koala, A-Trak DJ Jazzy Jeff, and Ali Shaheed Muhammad & Maseo. You can also visit RB3S World Finals: Guide and tickets. Keep up to date by using the following: #RB3Style, @RedBullCanada & @RedBull3Style. You can also RSVP on Facebook.

What started as an underground experiment back in 2007 has quickly grown into the world’s largest DJ competition and, for the first time, theRed Bull Thre3Style World Finals will hit Toronto thisNovember. Inbound from the four corners of the globe – from Albania to Australia, from Jamaica to Japan - the 21 top DJs on earth will take over the city of Toronto to compete for the title of Red Bull Thre3style World Champion. Over a weeklong series of world-class music events, each DJ will engineer and perform a crowd pumping, 15-minute music set mixing at least three genres of music to a full house of concertgoers and judges, in order to showcases technical prowess and melt the dance floor. All will come down to the World Championship final competition on November 9, where the last five DJs standing will battle for ultimate sonic supremacy and the most coveted DJ title on earth.