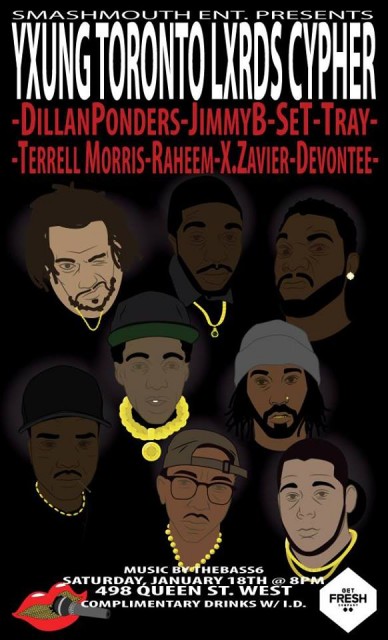 Last month on January 18th, SmashMouth Entertainment held a cipher at the Get Fresh Company, featuring 10 of Toronto's best artist's that were born in the 90's. The Yxung Toronto Lxrds Cipher features artist's like DillanPonders, Jimmy B, SeT, Terrell Morris, Raheem, Devontee, Tray, Allan Rayman, Rob GF and X.Zavier. If you're a frequent visitor to The Come Up Show, you've probably heard of all of these artist's. With the art of the cipher misinterpreted sometimes, it's good to see some live footage of local Canadian artist's holding it down. I think Papoose and Styles P said it best in their BET cipher from a while back, "Before there was radio, before there was [music] videos, before all the magazines; point the camera's down. This is what it was, the cipher. Three hundred and sixty degree's, the cipher". Which is exactly what the Yxung Toronto Lxrds cipher represented, bringing it back to the essence of hip hop and just having fun rhyming. Hosted by Roshin of Notes to Self, with music provided by The Bass6 and production by M Mac and BATMANONTHEBEATZ, everyone came together to create an enjoyable experience. With Toronto's hip hop scene on the rise more so than ever, we definitely need more events like this for artist's to get together. Check out this fourty seven minute cipher presented by SmashMouth Entertainment and let me know who your favorite emcee was in the comment section below.
Videos
·