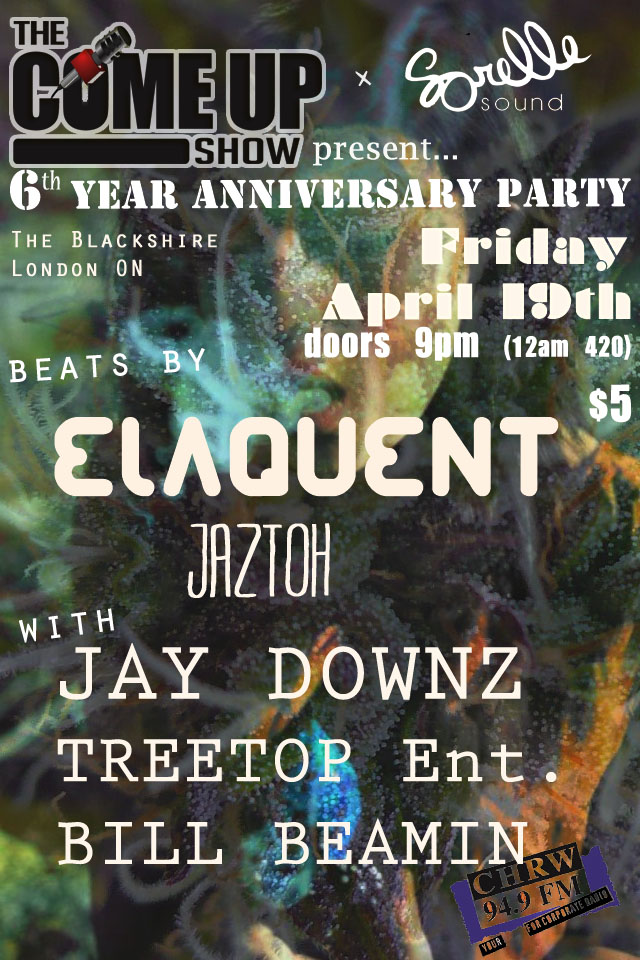 UPDATE: We just released a mixtape that features all the talent we have performing on our Friday April 19 show with Elaquent and Sean Price. Download The Come Up Show 6 year anniversary mixtape on soundcloud. IT’S OUR 6 YEAR ANNIVERSARY TONIGHT Y’ALL! HOPE TO SEE YOU THERE. 4/20 AT MIDNIGHT!

April 19th Sorelle Sound is proud to present one of Canada’s hottest beatmakers, ELAQUENT. Kicking off the 6 year anniversary celebration of The Come Up Show is Elaquent, a Guelph native the producer has been making a name from himself signing to HW&W in L.A., Stillmuzik in Paris, and Urbnet in Canada. He just returned fresh off his European tour to promote his latest EP – Parallel. On Sunday April 21 we are proud to present sean Price at Rumrunners as well!

What: Elaquent ft Jay Downz, Treetop, Bill Beamin, Jaz Toh.
Where: The BLACKSHIRE Pub on 511 Talbot S, London.
When: Friday April 19, doors at 9pm.
Admission: $5 bucks at the door. Physical tickets You can email info(at)thecomeupshow(dot)com for tickets. RSVP on facebook.